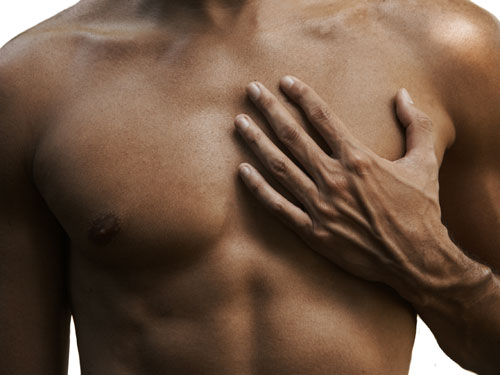 Gynecomastia is the medical term for the development of mammary tissue in males causing male breast enlargement. The absolute cause of gynecomastia is unknown but it is thought to be related to sex hormone imbalances. It is most often seen in adolescent boys, obese men and in the elderly.

It is often a source of extreme embarrassment, particularly during adolescence. Unfortunately, in most cases once breast tissue is developed it will not go away on its own and surgery will be required to remove the tissue.

Male breast reduction surgery is performed over 20 thousand times each year and can dramatically improve appearance and enhance self esteem for those who need this type of male plastic surgery.

Some boys or men have a condition known as pseudogynecomastia where mammary tissue has not developed but the appearance of “man boobs” is due to extra fat that has began to grow in the male breast area.

Cases of pseudogynecomastia will often only require liposuction of the developed breast fat. This can often be done under local anesthesia with the insertion of a cannula or tube to suck out the fat with liposuction.

If there is not too much male breast lipose tissue, no further incisions will be needed. The recovery time from this relatively minor procedure should be complete in a week or so and the patient will no longer have the appearance of male breasts.

Excess skin will be removed at this time as well. Some men may need reduction of the nipple size and/or repositioning of the nipple to a more natural location. In this case, the incision may be done laterally across the nipples rather than underneath.

Male breast surgery is considered to be a major male cosmetic surgery procedure and the recovery time may be considerable. After surgery, dressings will be applied to the incision site and an elastic bandage may be placed around the chest.

A drainage tube may be left in place for several days to allow for drainage of fluid and blood that may have collected during surgery. Patients undergoing male breast plastic surgery will be advised to rest for several days and healing may not be complete for several weeks.

Though male breast reduction can be a painful experience, the benefits of returning the chest to a normal appearance can greatly enhance self esteem. It will allow one to wear normal clothing and no longer be concerned about having “man boobs”. Some patients will even be comfortable when exposing the chest during swimming, boating or visiting the beach.