Cryolipolysis is performed by a plastic surgeon, dermatologist or other physician in the office setting. No anesthesia or sedation is required for the cryolipolysis procedure because it is non invasive and relatively painless. A small area of fat tissue is gently drawn into a suction cup, of sorts. 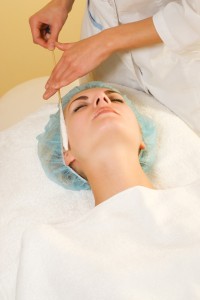 Who is eligible for cryolipolysis?

The technology is fairly new but appears to be quite safe in limited laboratory and clinical studies. It does seem that the best results are achieved by patients that are already fit and in good health. Also, cryolipolysis is better suited to treating small target areas like “love handles” rather than large areas of fat like the entire lower abdomen.

Are there side effects from cryolipolysis?

Patients that have been treated by this skin cooling device do report redness over the treated area which goes away after a few hours. The suction may cause minor bruising over the treated area. Also, since the application of cold also slows down the cellular processes of nerves and nerve endings, patients may experience some temporary numbness and tingling in the skin over the treated fat layers.

The science behind cryolipolysis

The term cryolipolysis can be divided into cryo- which is cold or freezing, lipo, which means fat and the suffix –lysis, which means to break apart. Therefore when combined, cryolipolysis means the destruction of fat cells by freezing or cooling. While the exact mechanism of action is still unclear, the current understanding is that when fat cells are exposed to cold, they undergo necrosis (cell death) and/or apoptosis (genetically programmed cell death; like a self-destruct program for the cell). The process of cryolipolysis is considered to be very similar to cold panniculitis in which fat cells die in response to cold. In any case, the fat cells break apart and die within days to weeks after cryolipolysis.

Is cryolipolysis approved by the FDA?