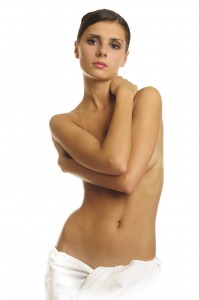 Symmastia, or webbed breasts, is a rare congenital breast deformity which results to the webbing of the two breasts right in the middle of the chest, connected via a soft, web-like tissue. This would look like there is only one breast, instead of two.

The same effect can also occur if an over-dissection were to happen during breast augmentation surgery. Although the original intention of the operation is to  increase cleavage depth, the implants can end up touching each other in the middle of the chest, crossing over the sternum, resulting in another form of botched breast implants.

Other terms coined for symmastia are “bread loafing“, “kissing implants“, and “uni-boob“.

Here is how symmastia occurs after an operation. To get the implants closer together to form a cleavage, the surgeon has to release soft tissues that cover the sternum, or the breastbone. The normal anatomical attachments of skin and muscle at the medial parts of the breasts where the cleavage normally rests are surgically disrupted, and the skin between the breasts is lifted. This increases the probability of the implants meeting at the middle, and the resulting defect is the webbed breast appearance.

The condition of symmastia does not usually appear right after the surgery. It would take months for this condition to develop and become noticeable. This also seems to affect thin women more than larger women, especially if implants that are too large are used on them because they have less tissue and fat covering the breastbone.

Breast revision is a surgical procedure to correct the occurrence of webbed breasts. In this procedure, the fat and tissues in between the breasts needs to be reattached to the breastbone. It involves the removal of the implants, and closing the space in the middle of the chest with the use of internal sutures. It starts with cutting the tissue that encloses the implant, after which tissue will then be sutured to keep the implant intact in place. The muscle is then seamed inside, connected to the sternum. Finally, the incision will be closed with another set of sutures.

The option of removing the implants is also made possible during this operation. This method can work best if the body is allowed to heal after a specific period of time. This can be achieved by waiting for around twelve weeks or more before putting back the implants. Putting them back in too soon after the procedure may just cause symmastia to recur via the effects of gravity and the strain of day-to-day activities.

After surgery, the patient is recommended to take plenty of bed rest, and increased fluid intake. Several medications and follow-up check ups will have to be scheduled, and the breasts are expected to feel sore during the recovery period.

To support and maintain the separation of the breasts, a certain form of brassiere and a bandeau called the “thong bra” needs to be worn. The thong bra is worn underneath the main brassiere, and its middle part lies between the busts to separate both breasts. This is intended to allow the area sutured to heal properly without straining it, and to induce the attachment of tissues and fats to the sternum.